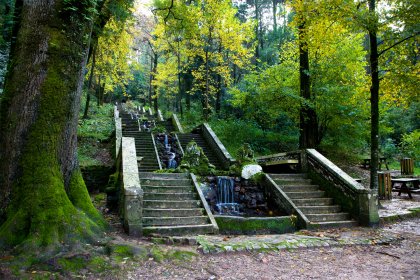 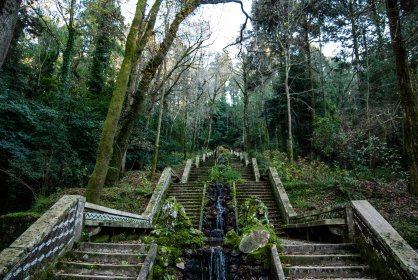 In a landscape of unique beauty, arises, in the municipality of Mealhada, a real monumental garden, infected by the richness of the site, considered by many, unique in the world, where the colors of nature and the Sun's rays, which penetrate the Grove, mingle in the silence that reigns-Mata Nacional do Buçaco. Sent to plant by the Discalced Carmelites, in the 17th century, in confinement and contemplation for more than 200 years, the space impresses with amount of vegetable species which houses more than 700, from all over the world, such as: firs, Redwoods, lindens, ELMS, beech trees, laurels, rhododendrons, giant ferns, and ash trees, Acacias, Cedar of Buçaco, the autochthonous species more relevant. The highest point, the Cruz Alta, located 550 metres.
In the heart of the forest lies a jewel of architecture and of Portuguese history, the Palace Hotel of bussaco, formerly the residence of Kings. The convent of Santa Cruz do Bussaco is unique in Portugal, by having the Church located between the four courtyards that form a kind of cloister. The chapels, hermitages of housing and rebuilding 20 steps from the Via Crucis are part also of the religious patrimony of the forest.
Buçaco Military Museum and the obelisk, which allude to the battle of Buçaco waged that serra, in 1810, represent part of the cultural heritage of the National Forest, absolutely essential in identity information.
Through the forest by running the Rails, the visitor is facing truly magical locations, such as the idyllic Cold Source or the wonderful Valley of the ferns, which confirm the incomparable beauty of the Mata Nacional do Buçaco and demonstrate why the time, here, have a very particular meaning.

Gardens near Mata Nacional do Buçaco

Jardim do Palace Hotel do Buçaco

Botanical Garden of the Palace Hotel of bussaco.

Location with great views of the green hills.

Space with diverse flora and a lake.

A place with many ferns.

Are you going to Mealhada?

Best Of  in Mealhada

What do do near Mata Nacional do Buçaco