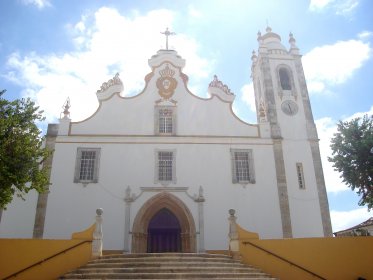 The Igreja de Nossa Senhora da Conceição was built in the late 15th century, damaged by the earthquake of 1755, after being the target of reconstructions in the 18th century. A new reconstruction in the 19th century gave him the current setting. Of the original building stands the Gothic portal with gilded capitals and Gargoyle.

This Chapel is located in the city's old quarter, in face of the shipyards and the Largo da Barca, where there was a boat to cross the River before the constru…

Round fountain with a large fountain, located in the center of a square. Around there is a pleasant garden area with some banks.

The building of the Jesuit College was founded in 1660 from the project of Bartholomew Duarte. The College has a church nave, the widest of Portimão. Currently…

Set of nine sculptures by various sculptors, erected in 2003. Are aligned along the recent Riverfront of Portimão.

Church located inside the College of Jesuits. Is in a poor state of conservation, in particular the ceiling and walls, and approved the first phase of restorat…