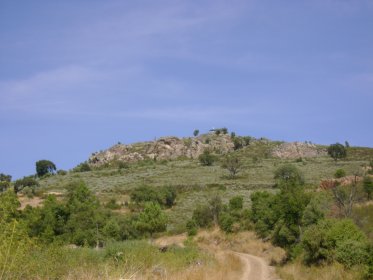 Mount the fence was a fortified town with residential and military function, being deployed in an isolated elevation dominating Sendim da Serra, in the extreme East of the ridge line that starts at the Castle de Gouveia, which is believed to be related. At the top is visible an alignment of stones of schist, forming a glacis that defines a line of walls which surrounded the Hill. The structuring of the settlement and the construction of the wall date back to the iron age, being occupied as defensive redoubt in the high middle ages. In the 20TH century, part of the wall was destroyed for removal of stones.

Chapel of plant simple longitudinal, with Rococo facade and other neoclassical details. The interior features coverage for simulated barrel vault down, in pain…

Traces of two waists of walls that once surrounded the highest point of the village. Originated probably in the iron age, having been later returned in the hig…

Cruise in 19th-century granite, to present a circular punch with two steps, a capital and a simple Latin cross cubic. Displays the date of construction: 1868.

Baroque and rococo church of longitudinal simple plant consisting of a nave, a chancel narrower and lower, and adossadas, a sacristy and a Bell Tower. It was b…

Are you going to Alfândega da Fé?

Best Of  in Alfândega da Fé

What do do near Monte da Cerca