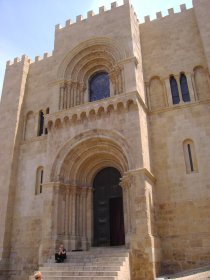 Fortress Church, whose plant was influenced by the churches of the Camino de Santiago pilgrimage. The construction of the current Temple was begun in 1162, after the destruction of the former, in 1117, by Muslim attacks the city. In the 16th century, the Church was coated with Spanish-Moorish tiles. Having undergone several renovations throughout the centuries, Romanesque architecture features Gothic, Mudejar, Renaissance, Mannerist and.

Former College founded in 1602 by the Franciscan province of St. Anthony of the observance. In 1834, with the extinction of the religious orders, was abandoned…

Work dated from the late XVI century, with 21 arches and a 1km length. It was constructed to bring water to the high part of the city. The building plan was ma…

The Almedina arch was part of the medieval walls, going back to the XI century, as the Arabian toponym that means “the city” indicates. Nowadays it is the en…