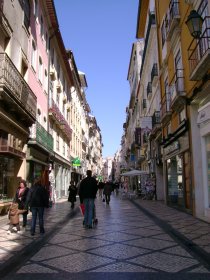 This tour recognizes the area exterior to the medieval walls, where initially were established military and religious orders, by the Mondego River. Begin at the Ferreira Borges Street and follow, from the outside, the old city perimeter, the Alta. At the crossroad of the Comércio Square with the Visconde da Luz Street, is the medieval Santiago Church, one of the first edifications in this area, standing out the romanic ornament of the doorways. Continuing ahead you’ll reach the 8 de Maio Square, where the town-hall is. On the right is the Santa Cruz Monastery, an important religious reference in the history of Portuguese art and where are buried the first Portuguese Kings: D. Afonso Henriques and his son and successor D. Sancho I.

Walking area right in the centre of the city, crowded with intense commercial activity, including hawkers.

The old area of Coimbra is characterized by narrow and steep streets that lead to the top of the hill, where the city was born. This tour begins at the Ferreir…

In this square, one of the prettiest in Coimbra, there are the São Tiago and São Bartolomeu Churches, the Pelourinho (pillory) and 17thand 18th centuries build…