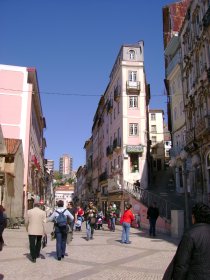 The old area of Coimbra is characterized by narrow and steep streets that lead to the top of the hill, where the city was born. This tour begins at the Ferreira Borges Street, where the Almedina arch draws the boundaries of the old city. Climbing the Quebra Costa Street ladders, on the left you will find the Arch and the Palace Sub Ripas, from the XVI century, with a renaissance façade, a work of João de Ruão. Further ahead, the Anto Tower marks the memory of the poet António Nobre (1867 – 1900). In the middle of the slope, be dazzled with the beautiful view over the city. Going round through the Coutinhos Street, you’ll get to the square where the Sé Velha tells its history, since the beginning of the nation. At the Borges de Carneiro Street stands the São João de Almedina Church which, nowadays, is part of the Machado de Castro National Museum, where shines the archaeological spoil and itssculptures, as well as the privileged view from the renaissance balcony in the building. Here you’ll find the students’ residences, called Repúblicas, each one with its own rules, keeping the academic spirit alive. As you leave the museum, on your right you’ll find the São Salvador Church, at the Couraça dos Apóstolos Street, where you can observe the stone retabulum dedicated to São Marcos and made by João Ruão (1540). This street indicates the place where the Companhia de Jesus built the church that would to turn out to be the Sé Nova. Further ahead is the Porta Férrea, an imposing entrance which invites to visit the University, the institution that made Coimbra a famous city.

Walking area right in the centre of the city, crowded with intense commercial activity, including hawkers.

This tour recognizes the area exterior to the medieval walls, where initially were established military and religious orders, by the Mondego River. Begin at th…

In this square, one of the prettiest in Coimbra, there are the São Tiago and São Bartolomeu Churches, the Pelourinho (pillory) and 17thand 18th centuries build…

What do do near Percurso pela Zona Antiga da Cidade