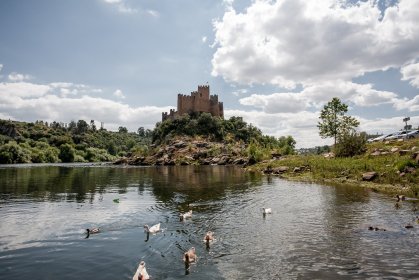 Located on a rocky Islet in the river Tagus, a Templar Castle warrant lift by Gualdim Pais, in the 12th century. Previously, it is believed to have existed a castro lusitano, improved by the Romans. The walls are flanked by ten towers that surround the keep and which gave the set an important defensive capabilities. Inside, there are several monumental doors that make communication between the different parts of the Castle. The access is made by river in a small boat crossing, lasting about five minutes.

16th century Church of nave, with pilasters in the corners, main facade of gable terminated cornice, with spans forming a central axis formed by the Mannerist …

This is a Renaissance temple founded by Dom Pedro de Menezes in 1528. It possesses a singular façade where the pediment symmetrically droops until the pillars …

Are you going to Vila Nova da Barquinha?

What do do near Castelo de Almourol