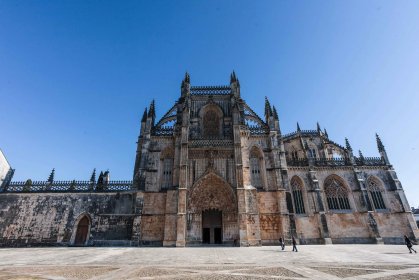 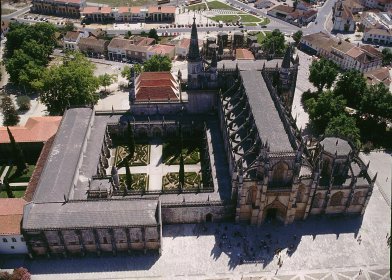 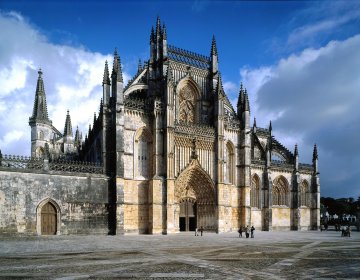 It is one of the biggest and most beautiful Monuments from the Gothic architecture in Portugal and the first from Manueline art in the 16th century. Batalha Monastery is also the most outstanding symbol from the Avis dynasty. The monastery was built by orders of D. João I as a consequence from a promise he made to the Virgin Mary in order to win the battle of Aljubarrota in 1385. The construction started the next year under the supervision of the Portuguese architect Afonso Domingues. In this initial phase the results produced were the majority of the church structures and two wings from the cloister. In 1402 the supervision shifted to Master Huguet who introduced the Flamboyant Gothic style which is possible to notice on the main façade, the dome of the church spaces and on the Chapter House, the Founder's Chapel and the initial structure of the Imperfect Chapel. On the 15th century it was built D. Afonso V cloister and during D. Manuel Kingdom the gallery windows on the cloister were shut and the work on the Imperfect Chapel restarted. From 1840 onwards it was under restore work. In 1980 it was transformed into a Museum working here two offices in stonework and glasswork. In 2007 it was voted one of the seven wonders of Portugal.

Bust erected in honor of Mouzinho de Albuquerque, Portuguese notable for its patriotism and patron of the cavalry Weapon.

Chapel with nave and chancel of smaller dimensions, the sacristy adossa. The main facade is gabled, with cross at the apex and pinnacles surmounting Freestone …

Sunny housing dating from the 18th century, Johannine style, which highlight the frames of the will drawn up in limestone. It was probably built in the late 18…

18th century building in which stands out the balcony alpendrada and the monumental work that shoots the spans.

Monument dating from 1968, designed by the sculptor Leopoldo Almeida, representing the Commander Nuno Álvares Pereira, who defeated the Castilian army at the b…

Church composed by rectangular nave and several dependencies, including the Dispatch room. The main facade is gabled and angular corners finished with pinnacle…

Are you going to Batalha?

Best Of  in Batalha

What do do near Mosteiro da Batalha