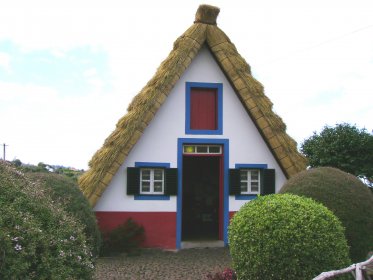 These houses have a triangular shape and are covered with thatched roofs. Popularly known as houses of Santana. Originally, these houses were composed of an attic, where they stored agricultural products, and by a ground floor, generally housing area, which was divided into two parts separated by a front. It is believed that these houses are traces of primitive construction, made of wood and thatched roofs and, which were all over the island. Because there, in the region, little rock hard and the weather be cold in winter it took this raw material, allowing also an adaptation to the seasons, fresh in the summer and warm in the winter.

Small chapel, dated from the XVII century, with sober lines and mannerist portal and façade. It is surrounded by very peculiar and picturesque scenery.

A small fountain with several faucets and a small structure on the top. It is located by the Parish House.

A belvedere built at the beginning of the 20th century that recreates a military battery, with a semi-circular plan. It has a backup house where the exhibition…

A baroque church of the 17th century, composed of a sole nave and a lower and narrower main chapel, with a bell tower and a sacristy.

A mill more than three hundred years old, that still grinds wheat and corn. It is the last water mill in Madeira.

Are you going to Santana?

Best Of  in Santana

Miradouro do Pico do Areeiro

What do do near Casas Típicas de Santana