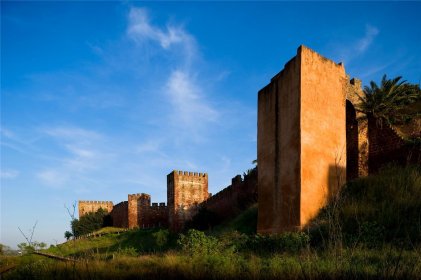 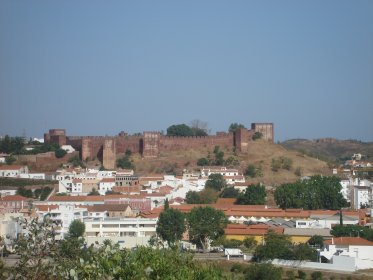 Silves castle is the biggest castle in the Algarve and one of the most remarkable works of military architecture inherited from the Arab occupation. Its structure was made up of several elements: the Alcáçova (fortress), the Almedina walls (at the central part of the fortified town), the Couraça (armour), the Arrabalde walls (located at the suburbs of the fortified town) and some ditches. Of all these elements the Alcáçova is the most important and is also where you can see two cisterns that date back to the time of the original building. You can also see a well, called Cisterna da Moura, at that spot. Archaeological digs uncovered a Moorish house, called “Palácio das Varandas” (balcony palace). The mixture of clay, gravel, sand and lime mixed with local red sandstone give a reddish tint to the building. From the towers and the defensive walls there is a magnificent view over the surrounding region.

Statue that celebrates the conquest of Silves. During D.Sancho I's reign, D. Mendo, his lieutenant, planned a surprise attack against the Moors. The attack was…

The defensive system that once enveloped the entire city of Silves was quite complete and sophisticated. It was divided into the following parts: the fortress,…

Church composed of a single nave and with a main facade equipped with a staircase with two flights of stairs. The façade also has a portico with a triangular p…

Roman bridge built over the widest point of the river Arade. The bridge is only suitable for pedestrian crossing and features five round arches. Medieval bridg…

Al'Mutadid, lord of Seville, conquered the city of Silves in 1053 and his son, Al'Mutamid, was appointed to rule over it at the tender age of 12. It was durin…

What do do near Castelo de Silves