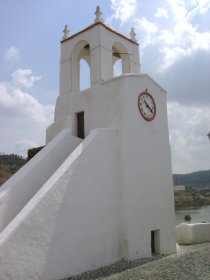 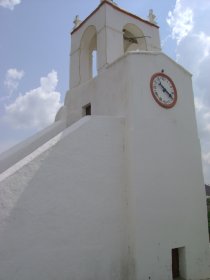 It is likely that the clock tower was erected in the late 16th century or early 17th century, in the context of the reorganization of the urban area of the Town Hall square. This building was erected in the vicinity of a set of representative structures of political power, judicial and economic administrative and reusing an old Tower of the wall, mark the edge of Town Hall square and take over as one of the emblematic elements from Mértola. In 1896 the primitive clock is replaced by another more recent than will continue to mark the time of the Old Village to the present day.

Water mills took advantage of in the past, the current of the river Guadiana to transform the grain into flour. Today, the mills are leisure venues.

Temple that stands out because of the absence of decorative elements.

Capela do Senhor do Calvário

Chapel of centralized plant with classical design. The chancel features round arch and altar have glass-enclosed dressing room, where are the pictures of Lord …

Castle of Romanesque and Gothic architecture, with quadrangular towers. The keep is on the hillside more phantasmic Shap. Medieval doors only if conserves of m…

This picturesque village with traditional houses and a built heritage relevant, configures him the status of "Village Museum". The intense archeological activi…

Are you going to Mértola?

Best Of  in Mértola

What do do near Torre do Relógio de Mértola