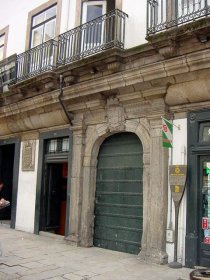 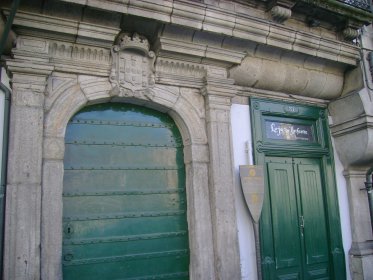 Building where the XV century Porto’s trade exchange ran. It has the medieval arms of the Casa de Avis, which recall the role of the King Dom João I on the renovation of the present Infante Dom Henrique Street. The building was restored in the reign of Dom Afonso V and became, also, the entrance to the Casa da Moeda (mint), from which you still can see the XVI century door. It was the Crown’s and the morgados de Fermedo property, one of the families that ennobled this important street and business centre of the old town.

Originally devoted to the Senhora da Piedade, it also welcomed the Senhora do Ó, a pregnant Virgin, when the chapel where it used to be was destroyed. The Fron…

Edifício do Instituto do Vinho do Porto

Built to be the Banco Comercial do Porto, in 1843, it was sold in 1935 and became the headquarters of the Instituto do Vinho do Porto, manager and supervisor i…

Built in the XIV century, this is a building with various floors and an arcade structure. It has several medieval and Manueline vestiges. The “façade” was enri…

The Ribeira is most likely the most tourist city of Porto. And there are many reasons that give it that status: the proximity of the River, the views of the br…

The most known monument of Ribeira is from José Rodrigues. It is a fountain which has a huge bronze cube at the centre.

It was built to be the headquarters of the Ordem de São Francisco but, in 1832, during the Porto Siege, it almost all destroyed by a fire. The Banco de Portuga…

What do do near Edifício da Antiga Bolsa dos Comerciantes