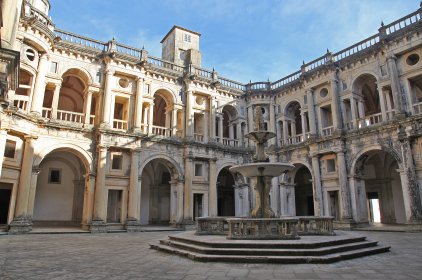 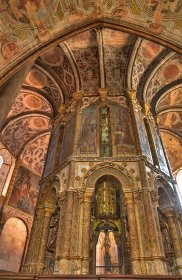 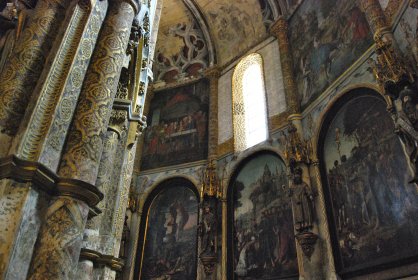 It initially belonged to the Order of the Temple and passed, in the reign of D. Dinis, to the Order of Christ. It is one of the main monuments of national architecture, where all the aesthetic stages, from the 12th to the 18th century, are profusely documented. Of note is the Cloister of D João III, the main Cloister of the Convent of Christ, considered the most monumental and beautiful work of the Renaissance, carried out by the architect Diogo de Torralva. Also noteworthy are the Cloister Lavagens and the Cloister of D. Henrique, which date back to the first half of the 15th century, the Cloister of Santa Bárbara, the Cloister of Micha (1528), the Cloister of Hospedarias consisting of two floors ( 1541) and finally the Cloister of Corvos. Consisting of seven cloisters and other buildings, it contains remarkable works of architecture inside. One of the symbols of greatest cultural interest is the window of the Chapter House, one of the highlights of Manueline art in Portugal. The Convent was considered a world heritage site by UNESCO in 1984.
This work was enhanced by the actions of Infante D. Henrique, D. Manuel I and D. João III. In the 12th century it was a unique octagonal charola with influences from the Near East, and was adapted to chancel of the new Manueline building in the 13th century. Until the reign of D. João III, masters such as Diogo de Arruda, João de Castilho, Diogo Torralva and Filipe Terzi intervened in the Convent.

What do do near Convento de Cristo