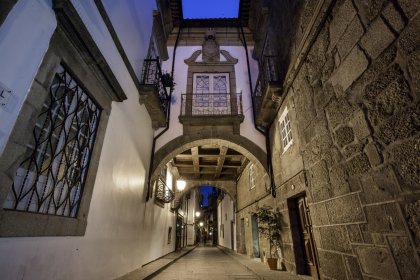 Classified as a UNESCO World Heritage Site, the historic center of Guimarães is a clear example of the preservation of a medieval urban core, in what is now a modern city. Intrinsically linked to the emergence of nationality in the twelfth century, the city is formed by a diverse set of buildings. In the center, you can easily see the bourgeois and noble houses from the 15th to the 19th century and the urban houses with smooth facades built during the 17th and 18th centuries. Of special beauty are the 19th century houses with a Pombaline style and houses covered in tiles, dating from the 19th and 20th centuries.

Bronze bust placed on a high pedestal in granite with the coat of arms of the city, erected in honour of João Franco.

House of medieval origin, with three floors and a small garden. It was rebuilt in the 17th century and saw the interior changed in the 19th century. Recently u…

Mannerist and Rococo Palace of irregular plant, consisting of two main facades with richly decorated portals. In the interior, especially the former Hall with …

In the 10th century, the Countess Mumadona had a monastery built on her estate. The fact that it was the target of intense Moorish attacks meant that a fortres…

Granite fountain with two cocks and, on top, carved coat of Portugal. It was built in 1820.

What do do near Centro Histórico de Guimarães