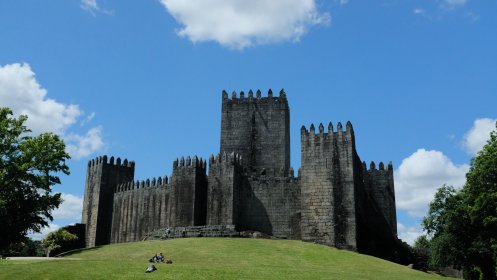 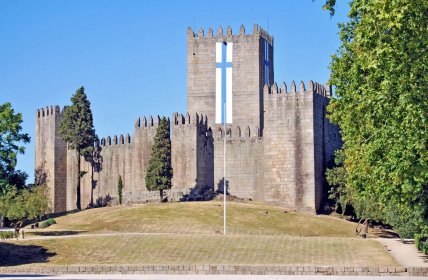 In the 10th century, the Countess Mumadona had a monastery built on her estate. The fact that it was the target of intense Moorish attacks meant that a fortress was built to protect the monks and the Christian community. Thus was born the Castle of Guimarães. After the birth of Condado Portucalense, it became inhabited by Count Dom Henrique and Dona Teresa, who had major works carried out on this monument. Between the 13th and 15th century, several kings contributed to the improvement of the Castle, after which it was abandoned, finding itself very degraded until the 20th century, when it was classified as a National Monument. It is a Gothic building with a sub-triangular plan, with a fence reinforced by 8 quadrangular towers, delimiting a courtyard, with the keep, 27 meters high, in the centre.

Bronze bust placed on a high pedestal in granite with the coat of arms of the city, erected in honour of João Franco.

House of medieval origin, with three floors and a small garden. It was rebuilt in the 17th century and saw the interior changed in the 19th century. Recently u…

Mannerist and Rococo Palace of irregular plant, consisting of two main facades with richly decorated portals. In the interior, especially the former Hall with …

Classified as a UNESCO World Heritage Site, the historic center of Guimarães is a clear example of the preservation of a medieval urban core, in what is now a …

Granite fountain with two cocks and, on top, carved coat of Portugal. It was built in 1820.

What do do near Castelo de Guimarães